EASTON, Pa. —Nov. 19, 2013— Ecopax Inc., a leading manufacturer of single-use plates and takeout containers based in the Lehigh Valley, today announces the completion of a $3.7 million equipment and facilities expansion that will increase the company’s manufacturing capacity and add 15 new full-time employees.

The new equipment includes one 12-ton thermoformer and one 19-ton extruder, both expected to operate at full capacity by year’s end. Additionally, six new storage silos were installed, near the Easton location’s two existing storage silos, adding to the manufacturer’s storage and production capabilities. This new equipment follows a $2.15 million, 75,000 square foot building expansion completed in 2012.

According to Christina Wong, vice president of operations for Ecopax, the plant expansion, new equipment and storage will increase Ecopax’s manufacturing capacity of single-use food containers and consumer tabletop ware by 50 percent.

“Although we were founded in 2007, the company really began to grow in 2010 and we have continued to grow rapidly,” Wong explained. “Our customizable product line of single-use foam, paper and plastic products are attractive to food service organizations and supermarkets, as well as their customers.”

Wong said Ecopax management has begun interviewing for the 15 new full-time positions, with at least two of those roles being in management. She said she hopes to have filled all 15 positions before the end of the calendar year.

ABOUT ECOPAX
Ecopax is a leading manufacturer of single-use takeout containers and consumer tabletop ware that are made with foam, paper and plastic designed to accommodate a variety of needs in the food service and consumer industries. For more information, please call (484) 546-0700 or visit EcopaxInc.com.

The merits or lack thereof regarding Chip Wilson’s comments during a recent Bloomberg TV interview not withstanding, when the public takes umbrage with statements made on behalf of a brand there are ways to apologize and ways not to apologize.

The Lululemon athletica founder’s Nov. 8 YouTube apology posted to the Lululemon Facebook page is a lesson in the latter.  Even the company he founded was careful, in response to media inquiries about Wilson’s video apology, to distance itself saying the posting was, “Chip’s reaction and statement – Lululemon did not issue one.”

The YouTube mea culpa – of sorts – starts with Wilson declaring he is “sad.” With his very first words, he failed in his attempt. Any media advisers working with him never should have let him say it. The public doesn’t care if he is sad. They do care if he takes ownership of what he said. They do care if he regrets having said it. They do care if he declares his comments as being wrong, hurtful or even ill-considered. And they do care if he apologies to those whom he might have offended. Simple and direct apologies in circumstances such as these are important. When the public is angry, don’t quibble. Apologize succinctly and with sincerity.

Second, his message seems targeted at those who work for Lululemon, and not the customers and general public he was perceived as having insulted in the Nov. 5 Bloomberg interview.

Third, aside from the distracting background gong you hear at the 10 second mark, Wilson is clearly reading from cue cards. If you want to look disinterested, disengaged and scripted during a public apology, the best way to accomplish this trifecta is to read off of cue cards into a camera.

Wilson was ill-advised in the making of this video. His lack of media training (often disregarded by businesses until – and even after – a crisis erupts) is evident in both the Bloomberg interview and in his video. Imagine how beneficial media training now seems to executives at Lululemon in retrospect. The initial damage might never have occurred.

Taking a step back from the specifics, the message is entirely wrong – as perhaps was the venue (Facebook). When messaging to employees or other internal stakeholders, keep that message out of the public eye. If you are apologizing to your loyal customers, do exactly that as plainly and sincerely as possible.

The public will generally forgive a brand and its spokespeople if they react quickly, with great care and sincerity, and if they clearly apologize and take responsibility for their words or actions. Anything less usually only compounds the problem, as Wilson has aptly demonstrated.

Effective apologies come in many forms. Unfortunately for Wilson and the brand he created, his YouTube effort is not among these forms. 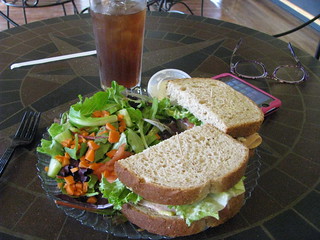 Wouldn’t it be nice to eat without getting mayo all over your keyboard?

We’re all guilty of not talking a lunch break and eating over our laptops at times. Even if we do step out for a “break,” we’re usually fiddling with our phones, checking emails, etc. Many PR professionals eat lunch at their desks. “Sixty-nine percent of PR professionals eat lunch at their desk rather than joining that chatty klatch heading out to a nearby deli, according to the PR Daily Salary and Job Satisfaction Survey” (PR Daily) With the year coming to a close, PR pros are especially busy planning for 2014, but it’s not an excuse to skip lunch.

Why it’s vital to take a lunch break

A few things you may want to do on your break

Lower pricing is offered only to select accounts as insurers maintain underwriting discipline and avoid across-the-board discounts, says State of the Market Report

Iselin, N.J. — November 4, 2013 — Despite a well-capitalized insurance market, the price of property-catastrophe insurance is surprisingly flat as insurers resist competitive pressure, maintain underwriting discipline and offer lower prices only to select accounts. This is according to the fall 2013 issue of the biannual report State of the Market: NAPCO Property Catastrophe Insights from wholesale insurance broker NAPCO.

Combining broker insight and analysis of property-catastrophe indicators, this report examines industry performance, catastrophe losses and the outlook for the end of 2013 and beginning of 2014. Key findings include:
•Despite $600 million in policyholders’ surplus, insurers are only lowering prices for select accounts with good loss histories—not offering across the board discounts.
•Insurers are maintaining underwriting discipline and resisting pressure to underprice accounts because of the influence of catastrophe models, low interest rates, increased accountability from ratings agencies and other factors.
•Low catastrophe losses have helped insurers report very strong results for the first quarter of 2013, with a 43 percent increase in net income to $24.5 billion.
•Frame habitational market still struggles with prices spiking and insurers exiting market.
•Hailstorm claims were up 84 percent in 2012, so insurers are imposing percentage deductibles for Midwest wind and hail coverage.

“A combination of trends appears to be leading to flatter insurance cycles and we are cautioning buyers to temper expectations about lower prices,” said David Pagoumian, CEO/President of NAPCO. “Rather than responding to market spikes and dips, insurers are considering the individual merits of each account. Broad downward pressure on rates is inconsistent with our experience.”

This smoothing out of market cycles is traceable to a few trends, which the report highlights in detail. Catastrophe models are getting better a predicting large losses, so rating agencies have pressured insurers to avoid discounting too steeply. At the same time, insurers cannot raise prices when major incidents—like Hurricane Sandy—fail to impact the well-capitalized market.